Inspired, in 2009, by an impromptu studio session together in Montreal, CGT and MG3 released a live recording in 2011, landed showcases at

END_OF_DOCUMENT_TOKEN_TO_BE_REPLACED

Inspired, in 2009, by an impromptu studio session together in Montreal, CGT and MG3 released a live recording in 2011, landed showcases at numerous arts presenter conferences, and sustained co-bill touring throughout North America. Their latest studio release, In A Landscape, refreshes the Trios’ touring schedule in the coming seasons.

Like their performances, the members of the ensemble offer a variety of configurations, leading guitar-oriented workshops, school performances, masterclasses, and demonstrations for aspirant and seasoned musicians. CGT/MG3 is the perfect concordance for festivals and performing arts centers.

"The Good, The Bad And The Ugly / Reel Mattawa" live at Canadian Guitar Fest, 2017 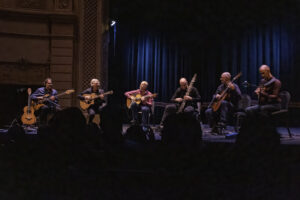 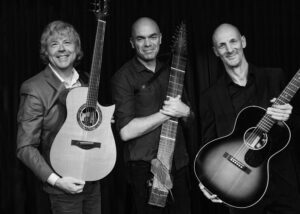 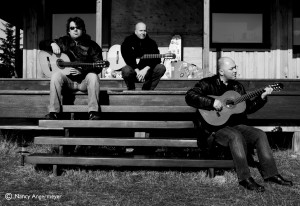 Hey now, sorry about this… Audio and Video downloads are not yet available.  For immediate needs, contact Pertz or click Media for approved streams on YouTube, SoundCloud, etc.

“Oh, of course it went just WONDERFULLY. The audience loved it so much, and the standing ovation at the end wasn't even something they thought about. They just leapt to their feet and roared the second they could." - Camille Barigar, Community Education/Special Programs Read Review

“The concert was outstanding! I think everyone thoroughly enjoyed it. What are great group to work with too. Very professional.” - Don Sparhawk, Center Stage Coordinator Read Review

"CGT+MG3 is brilliant show! The audience rose to their feet several times during the performance, followed by an extended ovation before the encore. TERRIFIC. We want them back!" - David Lavalley, Executive Director Read Review

Announcing the first studio album recorded together to celebrate CGT+MG3’s tenth anniversary! This new recording was several years in the making, recorded in a small church north of Montreal in Gore Quebec. The album features new original music and several 6-guitar arrangements of music from Radiohead, John Cage, and David Bowie. Listen